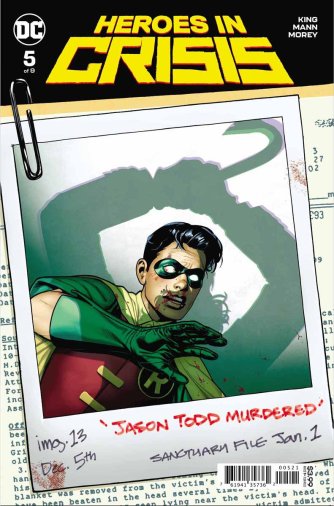 “The secrets of the DC Universe are hacked! Sanctuary wasn’t supposed to keep records, but now that the A.I. is compromised, superhero secrets are leaking all over the ’Net. Booster and Harley set aside their differences to focus on who they believe is the real killer (assuming one of them isn’t lying, that is). Meanwhile, Batman and the Flash continue to investigate the mysterious murderer. The answer can be found in Sanctuary…but is it safe to go digging in the crime scene?”

Heroes in Crisis issue 5 is out today, and Tom King is here to tug on our heartstrings again.

The mysteries of what happened at Sanctuary, who killed who, and what’s really going on, are still unveiling themselves. But while some of the heroes are still investigating, Superman and Wonder Woman are trying to deal with the press and public reaction to the leaks about Sanctuary. Damage control to help deal with the public and their rising fears about the concept of heroes with emotional/mental traumas.

In the meantime, Batgirl and Harley have teamed up to find Booster Gold. And Booster? He’s figured out something as well.

This issue was another hit with me. A beautiful, emotional mystery unfolding, featuring characters I love, and heartbreaking confession pages in the Sanctuary. Plus, Clay Mann knocks it out of the park again with absolutely stunning pages. And that Harley he does is just gorgeous.

I can’t wait for more Heroes in Crisis, and finding out what the hell is going on in this modern masterpiece.