This has been a long awaited tale, for many. One of my greatest adventures from a little over three years ago.

The story of my spontaneous trip to Jay and Silent Bob’s Secret Stash for Comic Book Men.

If you’ve ever read mypost about meeting Kevin Smith – which is still one of the all time greatest moments of my life – then you know that somehow, I stumble into good things purely on accident.

So, oddly, six months after meeting Kevin Smith, and he told me to go out to New Jersey and see the Stash sometime, I was contacted by someone from casting for Comic Book Men. She encouraged me to apply, and though I knew thousands of other people were too, I went ahead and applied.

And I made it.

Well. The first round of things.

I had to do a sort of audition tape of sorts, basically just a video of me explaining why I would be good for the show, etc. Then it went to the producers and AMC people to get their approval.

I figured that would be the end of it.

It was not. Before I knew what was happening, I was on the phone or emailing back and forth with casting people and producers and booking a very last minute trip to New Jersey so I could be in Red Bank for filming.

My mom had the OK to go with me, which was a relief given my health issues.

We flew in on a Tuesday, giving me a day to travel and find everywhere I needed to be. Which worked out well, considering I had a rough travel day getting from the airport to Red Bank. Then Wednesday we planned to go to New York for a day full of nerdy goodness, then filming Thursday, and flying back on Friday.

I was a bit scared to go in that first day we arrived in Red Bank, so we just walked to find the Stash, and the production office, and then went to eat at a restaurant called Gotham before heading back to the hotel to rest up.

Since a post about the day in New York already exists, we’ll skip to filming day.

I’ve never felt so important in my life.

We arrived bright and early to the secret office location for the show, my bag of clothes for possible wardrobe changes ready, and the nervous shaking reduced to a mildly noticable tremor. Robert Bruce was one of the first people I saw (AH ROB BRUCE! THE POP CULTURIST!), and that solidified how real everything was, which helped calm me down. I was greeted by one of the main producers I had been in contact with, and she showed me around a little. There was a huge row of tables along one wall, full of foods, and an entire fridge full of sodas and waters and more. She said to help myself, and got me all set up to work on more forms, and start meeting important crew members, including the director that came to sit with me a while.

One nifty bonus thing I got to see was the room they use to film with Kevin in the show, which isn’t actually in the Stash itself. The magic of tv, folks.

They had told me beforehand I could spend the rest of the day in the store once filming was done, if I wanted. Um. YES. So I had that to look forward to once I overcame the obstacle of trying to not be nervous on camera. It put me at ease that they said Walt was looking forward to our scene. It was going to be me, Walt, Ming, and Bryan, though Mike was in the store while we were filming.

I’ll never get over how cool stepping into the Stash was. As a fan of Kevin’s movies, as well as a HUGE fan of Comic Book Men itself, it was mind blowing to walk in and be surrounded by so many familiar things: the store itself, the things I’d seen on the show, huge props to Kevin’s movies, etc.

I met everyone briefly before filming began, and then we all took our places, before they let us roll and witty conversation commenced.

Once it was all said and done, they kept to their word, and allowed me to stay while they got ready for the next person that they needed to film with for the day. I also got to stay during that which was pretty cool.

When I asked Walt if he’d sign some comics he’d done the art on, he gladly offered to sign, then went ahead and drew some Batman sketches in them for me! We were just sitting around at the count while he drew, and I chatted with Walt and Bryan.

Every single one of the Comic Book Men guys was amazing.

(Yikes, I was not looking my best)

The entire cast and crew were all so nice and welcoming, from the sound guy to the producers and director, and of course the comic book men themselves. 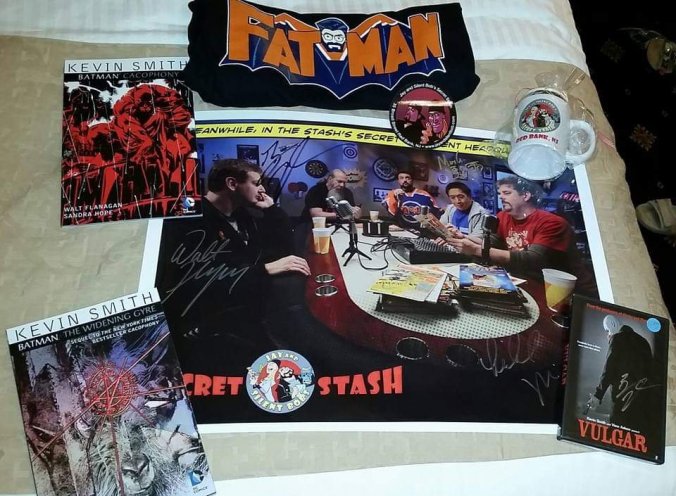 I left with loads of goodies, many signed, and dropped our things off at the hotel before leaving to get some Chinese food and enjoy the rest of the day and the lingering good feelings.

I can’t wait to return to Red Bank one day and reminisce on the great memories while shopping at the Stash.

Have you ever gotten to visit the Secret Stash? Did you watch Comic Book Men? Have you met the incredible Kevin Smith? Let me know in the comments!

3 thoughts on “The Secret Stash and Comic Book Men”